Back in early 2001 I fell pretty ill. The kind of sickness where you’re too nauseous to walk and you shove a kleenex up each nostril. Stuck in front of the computer, I decided to write a game.

I got the idea for Squared a long long time ago when I played a version of it on AOL. I decided it could use an OpenGL upgrade, and this is what i came up with.

It didn’t turn out quite as nice as i had hoped. This was my first experiment with winsock + opengl, so I was experimenting a lot. I wasn’t really paying attention to coding style; just trying to get it functional. When a given feature would work I was too impatient to go back and clean up what i had done.

So I got a pile of code that did approximately what I wanted it to, but was really a pain in the ass to sort through and modify. When I decided I didn’t like how the game looked it was too late to change it into something cooler, let alone try to add features. Also, I think I violated every rule of network programming.

Whatever. It was done, and it was playable. 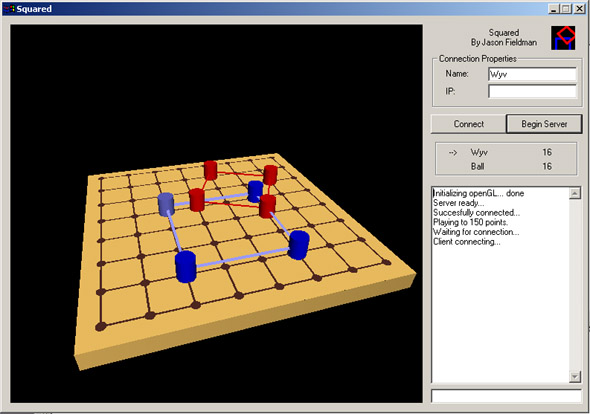 Players take turns putting down one peg at a time. When four of your pegs form the vertices of a square, you get (length of side+1)^2 points. For example, a square with vertices on the border of board is worth 64 points, while the smallest square you can make is worth 4 points. Squares can be tilted (see screenshots).

In my version, the first player to reach 150 points wins. To start a new game, press the connect button. The board will reset and the other player will start the next round. 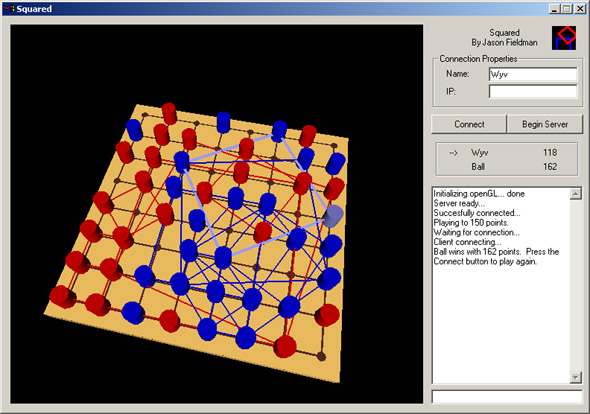 Squared got a mention on the opengl.org blog. For some reason this was a big deal to me.