During a certain period in 2010 I was really into /r/fffffffuuuuuuuuuuuu. I kept wanting to use rage faces in my messages, but it was just too inefficient to keep the faces bookmarked in a webpage somewhere.

Surprisingly there were zero apps that helped facilitate rage face usage in texts. Nothing returned in an App Store search for “fffffffuuuuuuuuuuuu”, “f7u12” or “rage faces”.

I decided to make an app that would let me quickly copy/paste rage faces on the fly, so I wouldn’t have to hunt around the internet anytime I wanted to use one. At the time, there weren’t that many faces (maybe 100 or so), so they easily fit into a single grid.

The app took me a few days to perfect. I plopped it in the store and made it free. I even told the reddit community about it. For about a year it was getting about 30-60 free downloads a day, and for months it was the only rage face app on the store. 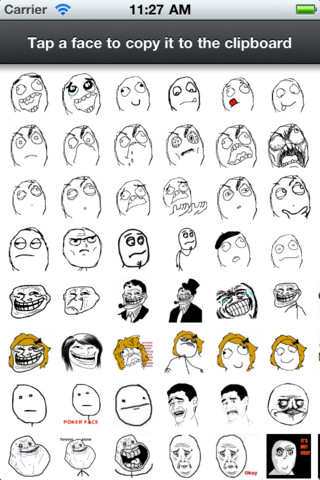 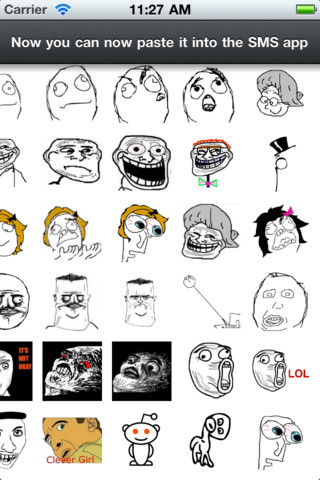 It was fun to have out there, since most of the people I would meet in 2011 had independently downloaded it for their own use, and it was a pleasant conversation point when they discovered I was one who made it.

Sometime in early 2012 the free downloads skyrocketed. I was getting five-figure download days. I wasn’t exactly sure what the cause was, but I let it ride. Over a few weeks my user count jumped into the high six-figure range. I saw the trend line flattening out and decided to cash in.

I made the app $0.99. The daily downloads dropped from five figures to three figures, but I still had a great few weeks. I couldn’t compete with the free, better alternatives that continuously sprouted up so downloads eventually dwindled. The app now languishes in the long-tail.